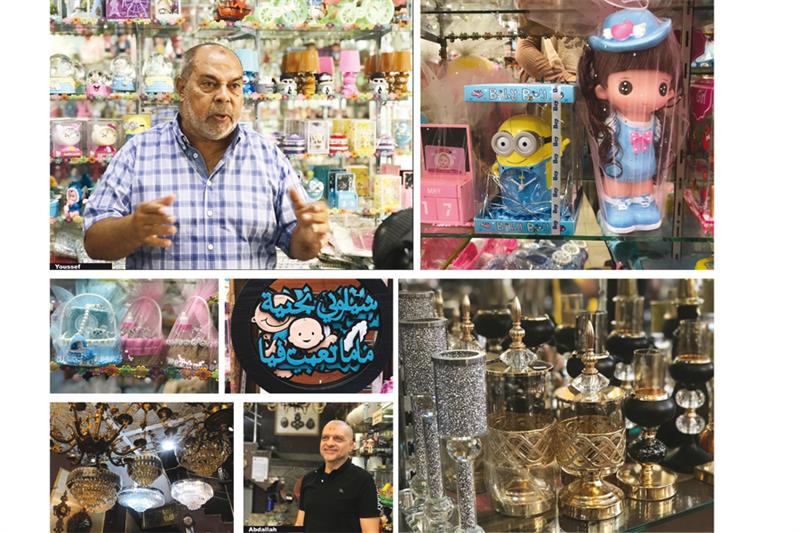 Since the Mamluk period, Darb Al-Barabra (Berber Street) in historic Cairo has been famous for its shops in which products used for occasions like weddings and baby showers (sebou) are sold, as well as gift bags, decorative materials and chandeliers for household use.

The street is named Darb Al-Barabra either after the descendants of the Berber tribe or the Amazighs from North Africa and Morocco who came to Egypt with Jawhar Al-Siqilli, one of the founders of Cairo, who lived in the area during the time of the Fatimid conquest of Egypt in the 10th century CE, or after the Nubian workers who lived and met there in the early 19th century.

The city of Cairo was founded by the Fatimids in 969 CE with the aim of penetrating further into Africa and creating a commercial hub. Darb Al-Barabra is just one example of the traditional streets of Cairo at that time.

Egyptians from different backgrounds all have some things in common when it comes to celebrating the birth of a newborn baby. Sebou (which means seventh day in Arabic) is a traditional celebration of welcoming babies to the world that takes place one week after a baby is born, unlike western prenatal festivals which usually take place before a baby is born.

In a sebou the baby is dressed in new clothes and is carried in a silver colander full of nuts and seeds. He is then gently shaken as the family members form a circle around and sing.

This tradition of trembling dates back to the ancient Egyptians and is intended to cleanse a baby of evil spirits. He is depicted in a picture on the walls of Queen Hatshepsut’s tomb at Deir Al-Bahari on the west bank of the Nile in Luxor, in which the events of the Queen’s birth are depicted. Anubis, the ancient Egyptian god of the underworld, is depicted rolling a sieve, showing how the customs and traditions of ancient and modern Egypt are intertwined.

During sebou, the mother gently steps over a sieve with her baby seven times while other women sprinkle salt on it to ward off the evil eye. They make as much noise as possible using metal pestles, for example, to scare away evil spirits and prepare the newborn baby for the real world so that he is not afraid of it. Family members buy gifts for the newborn and also receive gifts when they get home, usually a silk bag full of nuts and candy.

Nowadays, some families organize the slaughter of an animal, and this is considered as an offering or aqiqa to protect the newborn. It is a custom taken from the story of the prophet Abraham who also slaughtered a ram sent from heaven to save the life of his son and mentioned in the Quran and the Old Testament of Bible.

However, those long-standing traditions have changed due to the financial situation of some families and the consequences of the coronavirus shutdown, store owner Ahmed Youssef, 69, told Darb Al-Barabra. â€œThere is a big difference between the time before the coronavirus and after it in terms of sales,â€ Youssef said.

â€œWe sell our products at lower prices to entice customers to buy them. After the coronavirus pandemic, we didn’t have as many customers because a sebou the party is a form of gathering and no one can organize one under such conditions. Therefore, few people bought sebou gift boxes or wedding gift boxes. People with newborn babies organize a aqiqa instead, â€he said.

However, the whole tradition is not lost. â€œAlthough most of our products are Chinese, we still have some Egyptian products. As the Arab saying goes, “a situation that seems bad can turn out to be a blessing.” The lockdown has encouraged Egyptian manufacturers to make their own products, which are almost of the same quality as imported ones, â€Youssef said, adding that before the pandemic he had to travel abroad to get his products, but now he can find whatever he wants in Egypt.

â€œThe Egyptians are skilled and good at their crafts. Little by little, more and more things will be made in Egypt. It’s something that makes me proud as an Egyptian. The few customers we have now all buy Egyptian products, which are a cheaper alternative to imported products, â€Youssef said.

Before the pandemic, traders could pay an average of $ 3,000, but now the price of the same imported products may have increased to $ 14,000, a huge jump that would cause them to increase the prices of their products to customers. â€œThis is why buying Egyptian products is much cheaper,â€ Youssef said, pointing to an angel statue and saying it was an example of an Egyptian product.

DEPARTURE: â€œI started working in this field around the age of 14 with my father. My father said that a lot of foreign merchants lived in Darb Al-Barabra and he told me how excellent they were at what they did and that he had learned from them, â€Youssef said.

â€œI learned everything he knew. We are still working in the field of sales sebou and wedding gifts today, â€he added.

There is artistic craftsmanship in every product he sells, regardless of its source. â€œWe add details that make our customers happy, like a card that looks like ID or an Ahly Club pass with the baby’s name on it, or we include a traditional blue ribbon for a baby boy and a red one. . for a little girl with Quranic verses written on it or prayers, as well as the baby’s name, â€Youssef said.

â€œBefore the pandemic, people used to buy a lot of products, but now they want to buy the best at cheaper prices. Otherwise, they go to other stores that sell cheaper products.

â€œIn the past, we had many Christian customers who bought us wedding gift boxes. They could buy 400 boxes at a time. These days, no one is planning a wedding because of the coronavirus. But there are still clients who take gift boxes to distribute to loved ones without having a wedding ceremony.

Customer tastes have also changed, Youssef said. â€œIn the old days, people bought small statues. If it was a little girl, they would buy statues of little girls or angels, and if it was a boy, the statue would be of a boy. Nowadays people tend to buy simpler and cheaper products. People buy Egyptian products because they are cheaper for a sebou and copies of the Quran for wedding gift boxes, â€he said.

â€œWe have a problem with street vendors who do not give customers the opportunity to come to our stores because they block the sidewalks with their stands. We pay the electricity bills and taxes, but they pay nothing. They also cause traffic jams, especially in Al-Geish Street, the main street leading to Darb Al-Barabra, â€he commented.

Mohamed Hussein, member of the Chamber of Commerce and owner of a chandelier shop in Darb Al-Barabra for over 22 years, agreed. â€œNow, customers never go to stores. Instead, they buy from street vendors, mainly because of the low prices. They take our customers away from us, â€he said.

â€œToday, few Egyptian or imported chandeliers are sold. Sometimes a customer buys the Egyptian products because the imported ones are too expensive since the tariffs have increased. People tend to buy a local product even if its finish is not as good as the imported one because it is cheaper. A customer can choose the Egyptian alternative out of necessity, not out of choice, â€Hussein said.

He added that only 10 percent of customers buy imported chandeliers. Many customers buy modern models, but they still look for cheaper models nonetheless. â€œIf we compare the behavior of customers with that of seven years ago, only five percent of the previous number of customers come to buy our products now,â€ Hussein said. “Traders must sell local products or close, or sell clothes instead of lamps,” he added.

Abdou Montasser, the owner of a DIY store in Darb Al-Barabra that relies mainly on imported products, had another opinion, however. â€œLocal products are not in demand by all customers,â€ he said. â€œImported products are often better in terms of quality, like helium balloons which are now all the rage after social media platforms published images of them. “

He said there were still some products sold for every occasion, although customers will be watching their budgets. Montasser’s main problem has been the decrease in clientele during the lockdown. â€œI hope we are all luckier now, because for the past two years we have had to stay home without working,â€ he said.

Sameh Abdallah is another chandelier store owner in Darb Al-Barabra who has been working in the field for over 30 years. â€œWe first started selling the copper chandeliers that were used by our parents and grandparents. Previously they were oxidized in color with only three models on the market. Then the designs started to vary and get more complex. Designers would use metal patterns with ribbon shapes in chandeliers and even gold-plated pieces, â€Abdallah said.

â€œIn the past, customers would buy durable chandeliers made of copper or gold-plated metal. Now, they rarely buy these products. The majority of customers buy imported products, and it is the simple or plain models that are currently the most in demand. A customer may prefer a simple chandelier lit by an LED lamp despite its high cost as it saves them electricity even though it can cost up to LE 350. Crystal chandeliers are the least in demand because they are difficult to clean and fragile, â€Abdallah said, adding that less than 10% of the products are made in Egypt.

â€œOur biggest obstacle to progress is that there is no creativity. Traders want quick financial gains, so they import products which is easier for them. Another problem is that there are a lot of people who sell copies, especially the street vendors who give us a lot of problems, â€Abdallah said.

â€œI would like to see more Egyptian products on the market, but that will only be possible if they are developed. Instead of copying an imported product, an Egyptian craftsman should innovate and create his own creations. The focus should be more on the quality of the product than on the resulting financial gain, â€he concluded.

* A print version of this article appears in the November 25, 2021 edition of Al-Ahram Weekly.