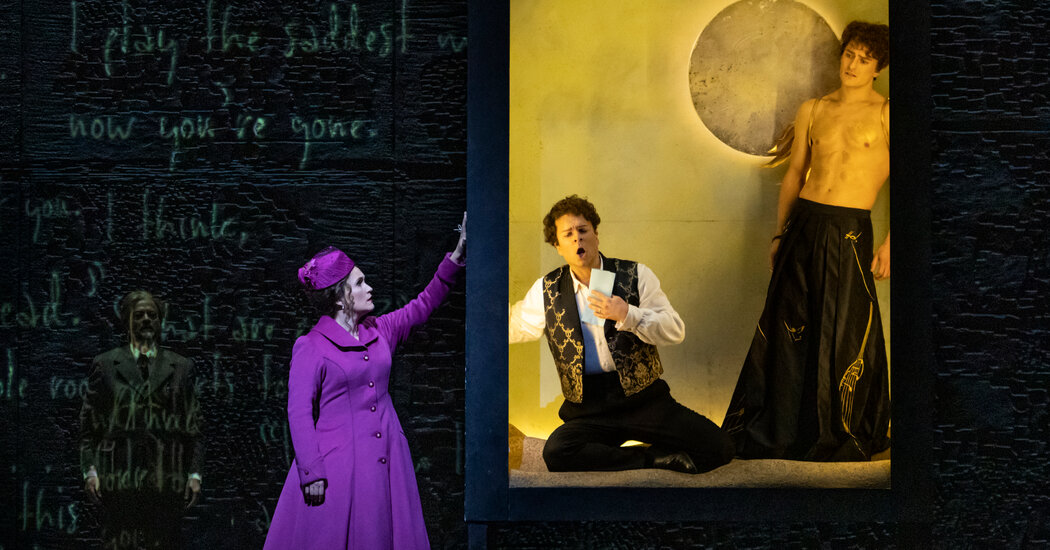 How does that sound when you’re dead?

“There are strange high-pitched noises”, writes a character in Sarah Ruhl’s play “Eurydice” to her daughter, who is still in the land of the living, “like an overflowing kettle”.

Slippery, stony sounds, as if you hear sour milk being poured, mark our first visit to hell at Ruhl and composer Matthew Aucoin’s teeming and boring adaptation of the 2003 piece, which premiered at the Metropolitan Opera on Tuesday. .

The ambition of Ruhl and Aucoin, to offer a contemporary vision of the history of Orpheus and his attempt to bring his wife out of oblivion, resonates with the very origins of this art. Jacopo Peri’s “Euridice” from 1600 is the earliest surviving opera, and Claudio Monteverdi’s “Orfeo”, written a few years later, is the oldest still regularly performed. The operas of Orpheus encumber the following four centuries; Luigi Rossi’s magnificent 1647 version had a rare production at the Juilliard School earlier this month.

It’s no surprise that a story about the greatest musician in history, a man who could make even stones cry when he performed, continues to woo his descendants. The screenplay offers composers a wedding, a tragic death, an evocation of the afterlife, an attempt at resurrection, a soaring lament – opportunities to shine and be in a great tradition.

Aucoin, 31, does not hesitate to take on this lineage. His score is massive and assertive, but agile; he continues to advance, infinitely eclectic, but unified by a muscular grip on the rhythm, and played with tireless vitality by the Met Orchestra under the musical direction of the company, Yannick Nézet-Séguin.

The scale of Aucoin’s music is luxurious, but she never basks for long, always rushing to the next different thing – as if, despite all her glory, she’s afraid of losing our attention. A brutal bustle reminiscent of John Adams shares the manuscript with softly sparkling bells; a riff on the musical elevator bossa nova, with raucous percussion drums.

The wedding dance of Orpheus and Eurydice, a hint of pop music glimpsed through ominous shadows, is a little gem. Hades, the god of the underworld who tempts her to her destruction, is a screaming tenor (here Barry Banks, savoring the extremity).

Orpheus (baritone Joshua Hopkins) has a double (countertenor Jakub Jozef Orlinski, in his Met debut). In Hell, the recent dead are overseen by a trio of those Weeping Stones (Ronnita Miller, Chad Shelton, and Stacey Tappan, all alive). Unlike most of Orpheus’ operas, the main aria here returns to Eurydice (soprano Erin Morley), softly lamenting the pain of loving an artist: “In his head there is always something more beautiful. Towards the end, an outpouring of Puccinian warmth gives way to even more punchy percussions, then to a swaggering pastiche of the Handelian baroque before the work’s ominously calm conclusion. A choir sings behind the scenes.

It’s a lot ; that may sound like too much. Both simple and poetic, Ruhl’s play is one in which a scene is devoted simply to Eurydice’s father creating a play for her out of string – about the most heartbreaking act you can imagine. But Aucoin gives the sequence an orchestral accompaniment of Wagnerian grandeur, reaching an acute climax, as if the father had just built the Valhalla.

And shortly before this passage comes an equally jarring instrumental interlude with the murderous intensity of something from Berg’s “Wozzeck”. Later, as Orpheus emerges from the underworld – instructed, sigh, not to look back at his wife, who follows him – a cacophony of drums and brass makes the moment less dramatic than just intimidated.

The opera feeds on too much, of course, and the myth of Orpheus is a story of life and death, which does not deserve great and fervent music. But given Ruhl’s beguiling treatment, the resulting sensation is that Aucoin’s music overwhelms the story, rather than guiding and being guided by it. You get the plot, but feel too overwhelmed to feel.

Excessive sheet music was also a problem in Aucoin’s last opera, the turgid “Crossing” (2015), about Walt Whitman during the Civil War. He wrote this booklet; thanks to Ruhl’s lucidity, “Eurydice”, heard for the first time in February 2020 at the Los Angeles Opera, is a clearer and stronger work. His play, written a few years after his father’s death, added a twist, grafting onto the traditional myth the story of a parent and a child mourning their distance.

This structure places much more emphasis than usual on Eurydice, the conjunction of those romantic and family strands. But at the Met, there’s a hazy white at the center of the work: Morley, in a role that dominates the music and the action, has a poised and precise voice – and so thin it’s almost inaudible for a long time. part of the opera. . (Aucoin’s dense score doesn’t help, but it struggles to make itself heard even in transparent moments.) There are artists with small instruments who nonetheless penetrate the vast Met; Morley’s only does in its highest grades.

As a result, we never feel constrained enough by it; it is a reminder that the emotional impact of opera characters emerges from the vocal presences of the singers. It’s easy to love this Eurydice, her gentle but non-sentimental presence, but it’s hard to care for her as much as you need to. His love for Orpheus, his recognition of his father (the sober baritone-bass Nathan Berg), his fear and his maturation – we know these things happen, but none of them really come to life.

Aucoin and Ruhl interpolated some unnecessary cuteness in a room that already leans towards the twee. At the gates of hell, the stones order Orpheus not to sing there “unless you sing in a dead language” – so Hopkins and Orlinski duly begin to sing Latin, in a parody of medieval plainsong.

The countertenor double sounds like the kind of idea that is adopted in a brainstorming session. That’s right, the sound of Orlinski’s luminous voice haloing around Hopkins’ sturdy bass lines can be quite pretty.

But it’s hard to determine what the double does on stage, especially in the production of Mary Zimmerman, which gives him tiny angel wings, but also often makes him appear shirtless and brooding. Is he the trainer of Orpheus? His username? His creative side? A clever musical effect ends up blocking the drama. (Coincidentally, Terence Blanchard and Kasi Lemmons’ “Fire Shut Up in My Bones”, which opened the Met’s season, also included a high-pitched double from a baritone, but with clearer dramaturgy: a boy soprano depicting the main character’s young self.)

Zimmerman’s bland and fantastical “Eurydice” staging effectively portrays the action – the lift to hell; the shower that makes the dead forget life; the menacing, pockmarked walls of the underworld – but lacking in magic and sparkle. (The stones, monumental covered gray beings, are charming; Ana Kuzmanic is the costume designer.) A relief: the text is projected as sung on Daniel Ostling’s set, allowing the audience to fully focus on the action.

“Eurydice” is most touching as a symbol of a shift in artistic priorities at the Met. If you had said just a few years ago that the company’s musical director would be conducting two recent American operas – this one and “Fire” – in two months, no one would have believed you. The pandemic reshuffle made that possible, but Nézet-Séguin said in a recent interview that the past year and a half has made him determined to keep that pace and personally direct a pair of contemporary works each season.

The odd adaptation of Brett Dean and Matthew Jocelyn’s “Hamlet” in 2017 is coming this spring. Premieres by Kevin Puts, Missy Mazzoli, Mason Bates, Jeanine Tesori and more are on the horizon, as do little-known works of recent decades, like “X: The Life and Times of Malcolm X” by Anthony Davis .

What a time to be on this side of the underworld.

Until December 16 at the Metropolitan Opera in Manhattan; metopera.org.