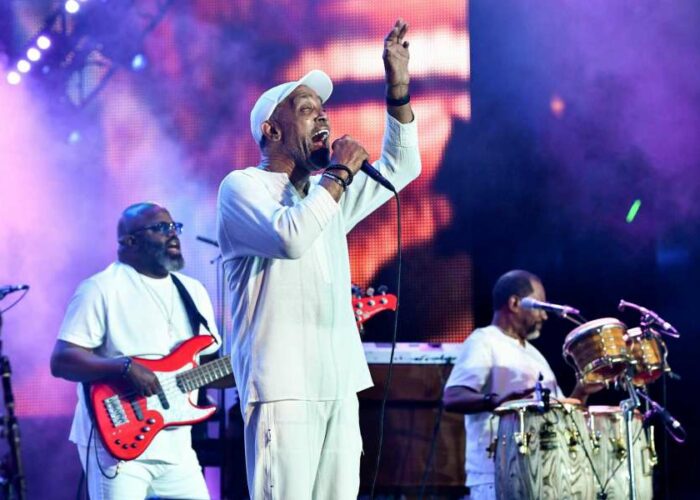 The R&B group Maze has been around for over 50 years. Led by the soft-spoken, baseball-cap frontman Frankie Beverly, this Bay Area collective (originally formed as Raw Soul) have released eight studio albums (all gold), as well as some live albums. (One of them, “Live in New Orleans” from 1981, also went gold.)

They are the source of old-school, urban and contemporary jams such as “Joy & Pain”, “Southern Girl”, “Before I Let Go”, “Golden Time of Day” and the classic “Happy Feelin’s”. Of course, many of Maze’s tracks have been sampled by hip-hop legends: 2Pac, J Dilla, A Tribe Called Quest, Rob Base, and even local hip-hop heavyweights UGK and Z-Ro.

However, Maze hasn’t dropped a gift of the Silent Storm in decades. Their last album of new music, “Back to Basics,” was released in 1993. (In a 2006 interview with Ebony, Beverly said that a new album, aptly titled “Anticipation,” was in the works.) And yet , Maze still remains a beloved band in the African American community and is headlining, along with the Isley Brothers, at the Toyota Center in Houston on January 15.

In a 2017 review for The Undefeated website, Bruce Britt wrote, “Attend a wedding, picnic, backyard barbecue or other similar black American family outing and you’re bound to hear Maze’s tracks on the playlist, the full-bodied funk of the band mingling with each other. perfectly with the most daring dishes of the rap and R&B idols of the day.

No one knows better how Beverly and her team move black audiences than Derrick Winfree, better known as DJ Aggravated of Houston. The veteran spinner has seen how well the locals respond to Maze, whether on wax or in person.

“Houston loves Maze,” he says, referring to the myriad of times he’s surprised the band live with an enthusiastic and enthusiastic audience.

In his early days, he remembers playing at a wedding and seeing firsthand what Maze does to people. wedding reception and they requested it. And then I saw the response he got, especially “Before I let go” and then it changed my mind. “

Ah, yes, “Before” is a staple of barbecues, a tune that will instantly get young and old alike. Hometown Queen Beyoncé knows it, which is why she made a cover of the song in 2018, as a bonus track for her album “Homecoming” and her Netflix concert film.

Beverly, who wrote and produced the song, had no idea Beyoncé was having an online cover. “She’s a great friend of mine, but I had no idea she was going to do this,” Beverly told Billboard after it happened. “She was silent until her people called me one day, maybe a week or two ago. When they played it, that’s when I heard the first draft of it, and I was blown away. It is a blessing.

Aggravated is known for performing both versions at places such as Third Ward’s Bar 5015, where the Sunday brunch crowd enjoys the soft, relaxed grooves that Maze is famous for. “They like a wide variety of music,” he says. “You can get away with Maze. You can get by with Earth, Wind & Fire. You can get away with everything and then turn around and play the best trap music ever out there. “

Maze is still considered a must-see whenever the members go on tour. They are known as the “Black Grateful Dead” for keeping a loyal fan base even though they haven’t released an album in years. (I’d say it’s a jam group for people who store stuff in Crown Royal bags.)

These days, it looks like people would be going to see Maze if it wasn’t maybe the last time they filmed. Beverly turned 75 in December, so the possibility of him hanging up the hat for good is increasingly likely.

Aggravated says he thinks he’s seeing Maze this weekend – you know, just in case it’s the last time. “Both groups are old,” he says. “So I don’t want to be one of those people who was like, ‘Oh, I got a chance to go see their last show. I wouldn’t like to be that guy, you know.

Craig Lindsey is a Houston-based writer.

Win a € 1,000 TUI gift card to spend on your dream vacation this summer