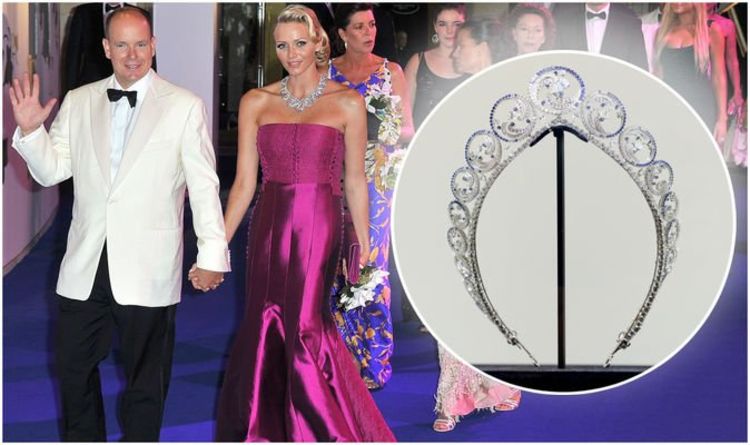 For their wedding, Prince Albert II ordered a set of jewelry wedding gifts for Charlene Wittstock, his future princess. Among these was a suite of jewelry from Van Cleef and Arpels. It was called the “Ocean” suite, which consisted of a convertible tiara that turned into a necklace and a pair of matching dramatic earrings.

Charlotte said: “After her marriage to Prince Albert of Monaco, Charlene Wittstock received a range of jewellery, each bespoke and made by Van Cleef and Arpels who have a long-standing relationship with the Monegasque royal family.

“Inspired by her days as an Olympic swimmer and aptly named the Ocean Tiara (with matching Ocean earrings), its clever design allows it to be worn as both a tiara and a necklace.

“The mix of diamonds and three complementary shades of sapphires helps create a nautical effect.

“When set together, they resemble the ripples of a wave, with 11 accompanying pear-shaped diamonds representing individual pearls of water.

“Having yet to be worn on formal engagement in its tiara form, it was spotted at the Red Cross Ball in 2011, in necklace form, and featured in traveling exhibitions around the world. “

The Princess of Monaco also wore the earrings to the Bal de la Rose in 2014, after wearing them in Paris in 2012.

The necklace clearly shows the design elements of the suite: circular elements set with diamonds and sapphires, designed to mimic the waves of the ocean.

The maritime theme pays homage to Charlene, who was an Olympic swimmer.

Charlene has yet to wear the tiara in public, but she has posed for photos in the room at least twice.

This included a portrait hanging in the Van Cleef and Arpels store in Monte Carlo, and on the cover of Hola! magazine.

The Ocean Tiara was on display at the Bowers Museum in Santa Ana, California, as part of the “A Quest for Beauty: The Art Of Van Cleef & Arpels” exhibition in October 2013.

Charlene and Albert married on July 1, 2011 and welcomed twins Gabriella and Jacques in 2014.

When Charlene married Prince Albert, it was assumed that she would receive the jewels that belonged to her predecessor, Princess Grace.

But instead of using his mother’s jewelry, Albert commissioned renowned jewelry houses to create an all-new suite of jewelry for his new bride.

In this way, Albert was honoring Charlene’s Olympic history and the jewelry was uniquely made for his new wife.

Van Cleef and Arpels had been official supplier to the Maison Royale Grimaldi since 1956.

They even designed a pearl set for Princess Grace, so there was precedent for Albert’s choice of jeweler.

However, Charlene chose not to wear this specially designed tiara for her wedding.

Instead, she chose a diamond floral hairpiece from the collection of her new sister-in-law, Princess Caroline.

Where to Celebrate Lunar New Year 2022 in North Texas