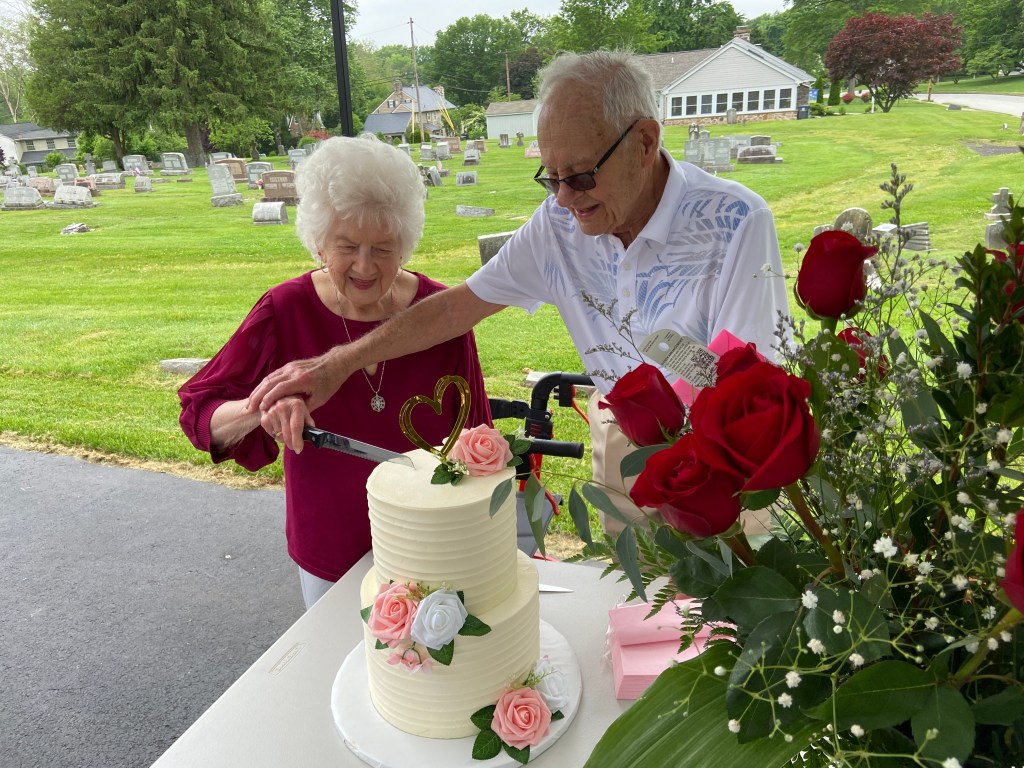 POTTSTOWN — When Martha Pish was born, she was the youngest of 13 children and weighed just 2 pounds.

Martha’s older sister was a nurse who helped deliver her and did not expect Martha to live through the night, according to family lore. “But they wrapped her in a blanket and put her in a shoebox over the stove,” according to Martha’s daughter, Anita Scherer.

In 2022, it seems that the prediction of a short life was a bit premature. Not only Pish 99, but her husband Chester too. The two will reach the milestone of the century next February, just nine days apart.

As if that weren’t enough on its own, the two were celebrated on Friday just days after their 80th wedding anniversary. According to State Rep. Joe Ciresi, D-146th Dist., that makes them “the oldest married couple in Pennsylvania, maybe the country.”

Gathered in their driveway on Friday morning, after rainy weather put the kibosh on a planned car parade, the couple were all smiles and jokes, welcoming family, friends, officials (and the press). “It’s fabulous,” exclaimed Chester.

“I never give her anything,” he joked with a wry smile when asked about his 80th birthday present to his wife. “I don’t want to set a precedent. That way, she is never disappointed.

She patted his hand, smiled confidently and replied “he lies a lot”.

The Pishes were married on May 23, 1942, at St. Philomena’s Roman Catholic Church in East Lansdowne, Delaware County. They married shortly after his deployment to the Navy in World War II.

Together they have three children – Albert Frank, Christina Elizabeth and Anita Alyce – seven grandchildren and 10 great-grandchildren, “and two more in the oven,” Martha added with obvious glee.

As the rain held, official proclamations congratulating the couple seemed to fall from the sky. First, Ciresi and State Rep. Tim Hennessey, R-26th Dist., congratulated the couple from the floor of the Pennsylvania House of Representatives on May 25.

“If you could see them when I visited on Thursday, he was mowing the lawn and she was cleaning inside,” Ciresi said. “These two individuals are an incredible asset to the Pottstown community. Their son is 79, to put things into perspective.

Ciresi said he also had a proclamation from Governor Tom Wolf, “but I had to fire it because they’ve only married you for 70 years.”

Hennessey provided the couple with a proclamation from U.S. Senator Pat Toomey and they received another from the office of U.S. Representative Madeleine Dean, D-4th Dist.

Pottstown Mayor Stephanie Henrick also attended with a proclamation. The proclamation noted that Chester Pish worked in a mine before moving to Pottstown for a job at the old Firestone tire and rubber plant. Of Polish descent herself, she even sang the couple a song in Polish as they cut their cake at Beverly’s Patisserie on the High Street.

“Everyone at the center sends congratulations and we miss you,” Brian Parkes, executive director of the Tri-County Active Adult Center, told the couple.

Pottstown City Council Speaker Dan Weand and his wife Polly, who were out of town, sent a vase of roses.

The couple attend St. Aloysius Catholic Church and ran the parish’s BINGO game for 23 years. While Martha volunteered at Pottstown Hospital and the YMCA, Chester held several positions with the IMC organization. He still enjoys gardening and she continues to cook and bake.

“We grew up on Maple Street,” Scherer recalls. “They were great parents, very supportive, and when I had my kids, even better grandparents and so, so helpful.”

The family, Scherer said, “always had fun. We like to play cards until 11 or 12 at night, mostly “hand and foot”, mom really likes that one. And just last summer we were dancing on my back patio” — mostly Polish polkas of course.