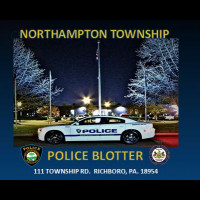 Patrol answered East Holland Rd. at Amsterdam Ave. for a traffic accident report involving a single vehicle. An unknown vehicle hit the stop sign between 12:30 a.m. and 12:45 a.m. and fled. Shortly after, Patrol located a disabled truck in the area with moderate damage. The owner/operator was not with the vehicle. Investigation in progress.

Patrol responded to an address on South Marmic Dr. for a hit-and-run accident report. The plaintiff reports that he heard a quad in front of his residence around 3 am. The Complainant reports that when he went out the next morning, he noticed that his neighbour’s mailbox was destroyed and that there was damage to the lawn.

Patrol responded to a business off Industrial Dr. for a report of theft from a vehicle. Complainant reports that an unknown subject stole the catalytic converter from a work truck that was parked in the parking lot. The flight took place between 03/18/2022 and 03/21/2022.

Patrol replied 2n/a St. Pike to Cherry Blossom Dr. for a two-vehicle accident report. Unit #1 made a left turn in front of unit #2. Unit #2 operator was injured, but refused to be taken to hospital. Unit #2 has been towed.

The patrol responded to a residence for a report of a runaway 16-year-old woman. The minor left her residence at approximately 6:34 a.m. on 3/22/22. The miner left a note. Detectives follow up.

Patrol responded to Middle Holland Rd. at Rock Way for a single vehicle traffic accident report. Unit #1 was turning when a vehicle turned in front of it. Unit 1 swerved to avoid a collision and hit a curb. No injuries were reported.

Patrol responded to a mall business for a report of a hit and run. The Complainant reports that he parked his vehicle in the parking lot from 6:00 a.m. to 9:00 a.m. When he returned to his vehicle, he noticed a crack and paint transfer on the driver’s side rear fender.

The complainant reports that she received a message from the US Post Office indicating that a package had been delivered. The complainant observed the package in her mailbox, but had other things to do before picking it up. When she went back to her mailbox to pick up her package about 45 minutes later and it was gone. The theft took place between 1:30 p.m. and 2:15 p.m.

Patrol responded to Almshouse Rd. in Temperance Lane for a traffic accident report involving two vehicles. Unit #1 attempted to merge with unit #2’s taxiway, but accidentally hit unit #2 while doing so. There were no injuries and minor damage to both vehicles.

Patrol responded to Newtown Richboro Rd. at 2 a.m.n/a St. Pike for a traffic accident report involving two vehicles. Unit #1 attempted to merge with the lane of unit #2 and crashed into the vehicle. No injuries were reported and no vehicles required towing.

Patrol responded to Hatboro Rd. in Syracuse Lane for a traffic accident report involving two vehicles. Unit #1 attempted to turn left in front of unit #2 and was hit. The operator of unit #1 was taken to hospital with injuries. Both vehicles required towing.

Suspect came to our HQ to fill out paperwork for a vehicle. It was learned that he had an active warrant from the Tinicum Township Police Department. The suspect was taken into custody and released in Tinicum.

Patrol responded to an ongoing burglary in Stockton Place. The patrol received reports of three people fleeing the residence. Two of the three suspects were arrested. Investigation in progress.

The patrol responded to a residence off Hilltop Dr. for a theft report. The Complainant reports that between 3/19/22 and 3/26/22, an unknown subject stole her son’s green dirt bike from the shed. The dirt bike is described as a 2020 Kawasaki KLX 110. The investigation is still ongoing.

The complainant reports that an unknown passenger left a black bag in the back of his vehicle. The complainant said he was a Lyft driver and had many passengers throughout the day. Most of the rides took place in Northwest Philadelphia. The complainant was advised to report to his company, but we would retain ownership for the time being.