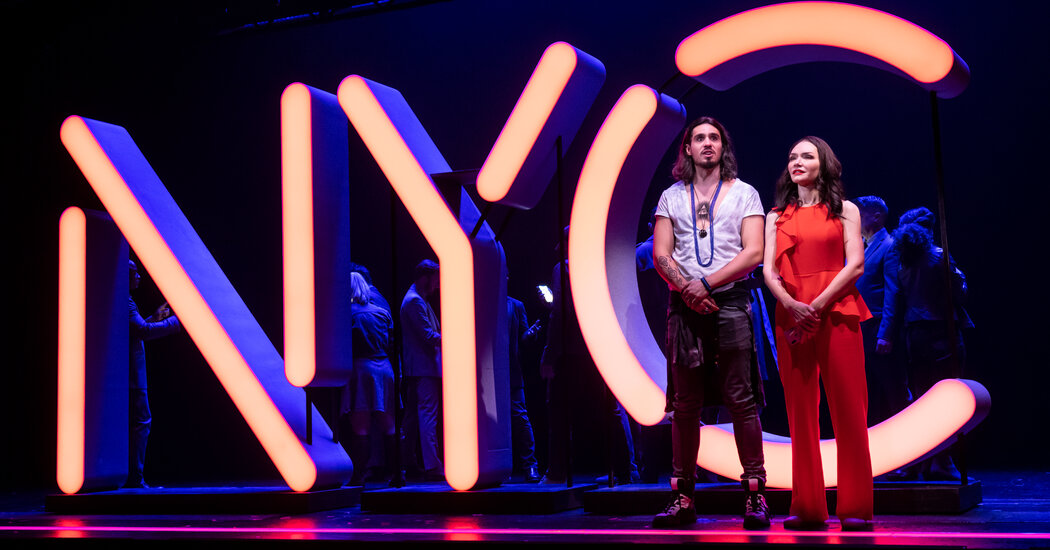 On Broadway stages the beautiful halls are empty

When Bobbie’s balloons are more glamorous than her, your “Company” production has a serious problem.

I’m talking about the inflatable Mylar numbers that, in the current Broadway revival of the Stephen Sondheim-George Furth musical, continue to look away from the main character as she is feasted on by friends on her 35th birthday. .

These balloons – replacements for Bobbie’s endangered youth – aren’t the only stage stealers. Bunny Christie’s ingenious design for the revival is filled with visual gimmicks that, by representing the themes of the production, continue to crowd out the characters.

During the song “Another Hundred People” – a barbed-wire homage to the failed connections of urbanity – large neon letters that spell out the show’s title begin to roam the stage, as if stalking the cast. Eventually, three of the letters cluster together to spell “NYC”: a well-defined point, although I couldn’t help but wonder what had happened to the other four.

Then there’s the maze of interconnected spaces, some linked by hatches, which portray Bobbie’s path to the company as a cross between Alice in Wonderland and Chutes and Ladders.

But for all the intelligence of Christie’s designs, they don’t feed Marianne Elliott’s production so much as they crush it, filling its many dramatic holes with a feast for the eyes.

This isn’t news on Broadway, which has never encountered a conceptual glitch that it hasn’t been able to attack with confetti cannons and other weapons of what you might call hyperdesign. Spectacular highs are part of the brand, and when used intelligently they can both delight and inform.

Yet if we look at the salons that have opened or reopened in recent months, it seems to me that the creators, bringing ever more astonishing feats, too often eclipse the work they are supposed to support. As if to compensate, the stories darken; their beautiful rooms, to paraphrase Kafka, are empty.

Take “Diana, the musical,” which I won’t go over again on the coals, except to say that it was wrong from start to finish. (It closed, after just 49 performances and premieres, on December 19.) Its sets weren’t particularly assertive either: Buckingham Palace and other venues were barely hinted at by tracery of light bulbs.

But apparently, having decided that what audiences want most from a fancy about the life of the People’s Princess is a jaw-dropping parade of extravagant costumes, the producers have budgeted accordingly. The 38 outfits designed for Diana by William Ivey Long showcased how she transformed from kindergarten teacher to frump royal to executive princess to international fashion plate much better than writers.

No wonder those dresses – and the art of quick change that, in one scene, saw him change them six times – won applause. Unfortunately, in the process, the character himself was made about as expressive as a hanger. This was almost literally the case in her wedding scene, as Jeanna de Waal, who played Diana, disappeared inside a dress constructed like a cage.

Pretty clever metaphor, but why did the costume design have to do as much work as the story itself should have done?

The problem is even more evident in the Lincoln Center Theater production of “Flying Over Sunset”, although it is a much more interesting musical. In Act II, his book, by James Lapine, imagines a weekend in the late 1950s when Cary Grant, Aldous Huxley, and Clare Boothe Luce simultaneously experiment with LSD. Their hallucinations are meant to resolve the unresolved conflicts carefully set up in Act I.

But how do you dramatize a hallucination? Even if you can describe it in words, it will never be as interesting to those who don’t stumble as it is to those who do.

Lapine’s book does not overcome this obstacle, but as a director he was able to assemble a team of designers who at least come close. In this case, it’s not so much the set or costumes that do the heavy lifting as the lighting (by Bradley King) and screenings (by 59 Productions) working in concert with the sound design (by Dan Moses Schreier). In their hands, the psychedelic imagery, amplified footsteps and intensely colored light become a journey in themselves, peeling the everyday skin to reveal a richer world within.

This is not a real solution, however; the often magnificent imagery has the side effect of rendering ordinary perception unimproved by pharmaceuticals mundane. As soon as the characters speak, the illusion of wealth evaporates. While it is questionable that travel changes characters, as Lapine postulates, it is certain that they do not change us.

“Flying Over Sunset” let me try to decide if the muscular design wins because the ideas are too fragile or if the ideas recede because the design monopolizes all the attention. Either way, it’s a predictable problem, and some productions have developed workarounds. “Moulin Rouge! The Musical”, for example, is smart enough to keep dialogue to a minimum as it floods the theater with sound and color. If it ever gets the audience some fresh air, the silliness of the story could being shown to be the wrong kind of distraction.

Which doesn’t mean there is a good kind of distraction. A show that has enough in mind, with minimal confusion and length, doesn’t need to be bombarded with alien sensory excitement. That’s not to say that it has to be visually dull, although for economic reasons it often is.

Take “Kimberly Akimbo”, one of the most beautiful and soulful new musicals of 2021, with music by Jeanine Tesori and lyrics by David Lindsay-Abaire, based on her 2000 play. Atlantic Theater could have been even better with a more exciting design to support those feelings and a bigger setting to spark Victoria Clark’s stupendous performance as a teenager who ages too quickly. Perhaps we’ll get a chance to find out if the show, scheduled to close on Jan.15, will move to Broadway in the New Year.

In other words, Broadway pizazz isn’t the problem; quite often, this is the solution. Set that can change locations instantly, or costumes that fix time and class with almost taxonomic accuracy, can anchor while increasing the illusion of life.

This is true even in non-musical pieces which have become much more visually abstract in recent years. You rarely see sofas and kitchen sinks on stage, let alone miss them. The 164 years of American commerce covered by “The Lehman Trilogy” convincingly unfold in a rotating glass box.

But for the most part, hyperdesign is a clue that something fundamental is missing. Often times that missing element is the conceptual discipline that allows a play, even when set on an empty stage, to hang on and score its points. You can see it performing flawlessly in shows as varied as David Byrne’s “American Utopia” (with its elegant aluminum chain curtains) and “Dear Evan Hansen” (with its elegant aluminum chain curtains). hypnotic walls of online data) – productions in which design and production go hand in hand.

And you can see it, perhaps most clearly, in “Six,” which turns conceptual discipline into a fetish. Each of the wives of Henry VIII featured in this song has their own theme color, song genre, and pop star inspiration. And while the setting is minimal – it could have worked just as well for “Diana” – the lighting (by Tim Dieling) and costumes (by Gabriella Slade) are at the peak of the rock concert, expressing the ambition of the story. thrill.

Which it totally does, because sometimes the secret to effective design is proportion – and knowing when we really need the confetti.