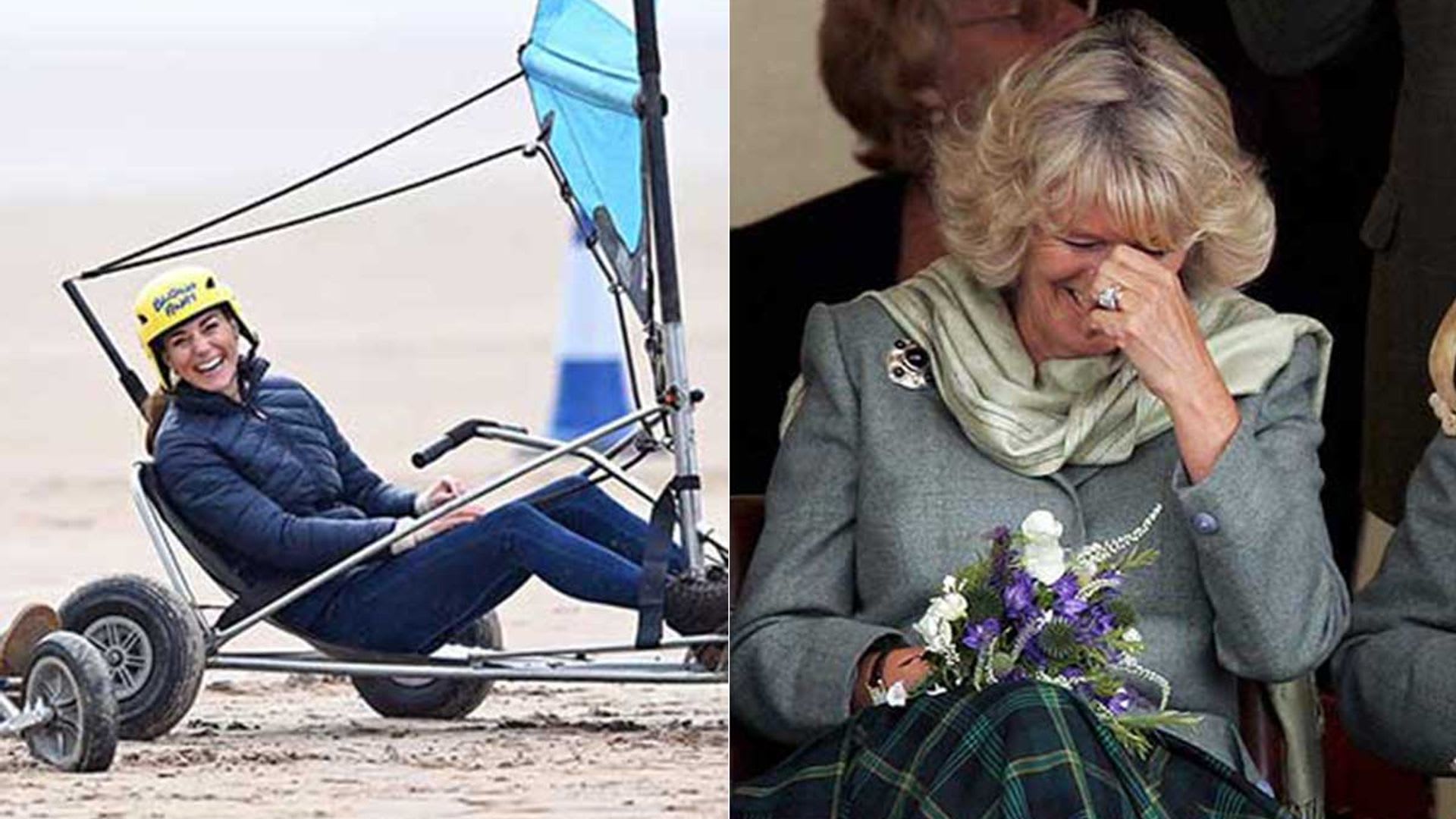 Being a member of the royal family often means serious business, but every once in a while some of our favorite royals can lose their temper with a fit of giggles!

Some of the best photos are captured during those candid and more relaxed moments at royal engagements. Here has HELLO!we decided to collect the most heartwarming shots…

AFTER: Royal rule breakers! 14 times the Queen and her family have broken the rules

SEE: 8 Royal Family Members Who Surprised Us With Their Tattoos And Body Art

The then Duke and Duchess of Cambridge couldn’t contain their laughter as they tried out land yachting on West Sands beach in St Andrews during their tour of Scotland in May 2021. As always, William and Kate showed their competitive natures, as the royal told her husband: “I’m catching you!”

The Countess of Wessex

It was truly a fun time on the farm for Sophie and her husband Prince Edward when they visited Vauxhall Town Farm in October 2020. The The Countess has a serious case of giggles because she was invited to feed the alpacas.

“You have a funny face” Sophie said to one of the alpacas, Jerry, before adding: “I guess you must think I look funny too.”

The Royal Family were visiting the farm to see their community engagement programs in action – joining staff, volunteers, local residents and school children as the farm marks the start of Black History Month.

The Duchess of Sussex

Meghan Markle was left in stitches as she was serenaded with a song about mosquitoes during a visit to Tonga’s oldest school on her first official tour in November 2018. Accompanied by her husband Prince Harry, the mother-to-be couldn’t contain herself as she watched the Tupou College Boys choir perform a song, complete with flying actions and buzzes to welcome the couple to their forest location on Friday. The purpose of the song was to scare away mosquitoes that might have been flying.

AFTER: Royals and their close lookalikes – see the best photos

The Prince and Princess of Wales posted this beautiful family photo for their Christmas card in 2020 and we love how much Prince Louis laughs in the portrait. It looks like the family were having a fun day outside when this snap was snapped by Matt Porteous, as royal fans spotted that Louis and his big sister Charlotte both had muddy knees!

The Prince and Princess of Wales

In January 2020, Prince William and Kate delighted members of the public in Bradford as they made their first joint engagements of the year. The royal couple headed to MyLahore, a chain of British Asian restaurants that took inspiration from Lahore, the food capital of Pakistan. And to everyone’s surprise, they had the chance to make mango kulfi milkshakes. Under the guidance of operations director Ishfaq Farooq, the royals were seen showing their jovial side as they were stuck.

Before the “Fab Four”, William, kate and Harry would perform some official duties as a trio. Here, members of the Royal Family attend the Charities Forum in London in 2015. They tried “Welly Wanging”, which involves throwing rubber boots at a plastic model in the hope that it tips over. Competitors William, Kate and Harry each went, with Prince William emerging as the champion.

These two always laugh during engagements! Charles and Camilla were attending the Garden Party to Make a Difference at Clarence House in 2010. They watched a performance of Henry Dagg’s Cat Organ, causing a fit of laughter.

The Queen and Prince Philip

Perhaps one of our favorite photos of the late Queen and the late Duke of Edinburgh, this photo was taken as the couple bid farewell to Irish President Michael D. Higgins and his wife Sabina in Windsor in 2014 .

We wonder what he said! The future king shared a joke with his mother-in-law Camilla at the opening ceremony of the Invictus Games in London in 2014, causing Camilla to almost cry with laughter.

AFTER: The Duchess of Cornwall reveals she’s taking a break from Instagram

The Queen and Meghan Markle

A month after joining the Royal Family, Meghan made her first joint engagement with the late Queen in Cheshire. While many would feel incredibly nervous completing the task, Meghan showed her relaxed and confident nature as she chatted and joked with Her Majesty.

Cambridge’s youngest child made his Trooping the Color debut in 2019. Frantically waving to well-wishers below and pointing planes skyward, Louis provided plenty of entertainment for his parents and royal fans. William and Kate looked like they were on cloud nine, cooing over their baby boy.

In Scotland they are known as the Duke and Duchess of Rothesay. Charles and Camilla couldn’t contain themselves watching the tug of war at the 2005 Mey Highland Games, where they also drank whiskey from a quaich (a shallow bowl). It was given to the royal family as a wedding gift and judging by the photos, they were still in the honeymoon phase!

The Cambridges had a blast at the 2012 Paralympic Games in London. The pair were in good spirits as they attended a track cycling event, which also saw them take part in a wave of crowds around the velodrome.

The Duchess of Sussex

At Trooping the Color in 2019, Prince George did his aunt Meghan burst out laughing as the family left the balcony of Buckingham Palace after watching the RAF flypast. George waved back at the crowd, instead of turning around completely, prompting Meghan to laugh at her nephew.

The BAFTAs are a formal commitment and kate looked every inch the perfect princess when she arrived at the Royal Albert Hall over the weekend. The assembled audience of A-listers rose to welcome their royal guests and the room was so quiet you could literally hear a pin drop.

As the Prince and Princess of Wales sat down, Kate whispered to her husband how incredibly quiet it was. Leaning over to speak to BAFTA Executive Director Amanda Berry, she giggled when her hubby suggested they sit down quickly! Awkward silences happen even when you’re royal.

The Queen and Charles

One of the most fun engagements of the summer is the Braemar Games Highland Gathering. It marked the return to royal duties for the late Queen, who used to spend the warmer months at Balmoral. Here, the monarch is pictured laughing with husband Philip, son Charles and daughter-in-law Camilla as she watched the showdown.

The Duchess of Sussex and Princess Kate

In their first official joint appearance, Meghan and Kate shared a sweet moment together. The couple were attending the Royal Foundation Forum in London with their husbands Harry and William.

The Queen’s late Platinum Jubilee celebrations were filled with plenty of lighthearted moments. And the spectacular show staged outside Buckingham Palace certainly seemed to hit the right note with some members of the royal family.

Little Prince Louis was particularly amused by the packed evening of entertainment, bursting into giggles throughout the night. Here, the four-year-old enjoyed a moment of humor with his doting mum, Princess Kate.

Make sure you never miss a ROYAL story! Sign up for The Royal Explainer newsletter to get your weekly dose of royal features and other exclusive content straight to your inbox.

Book Box: The Gifts of Reading