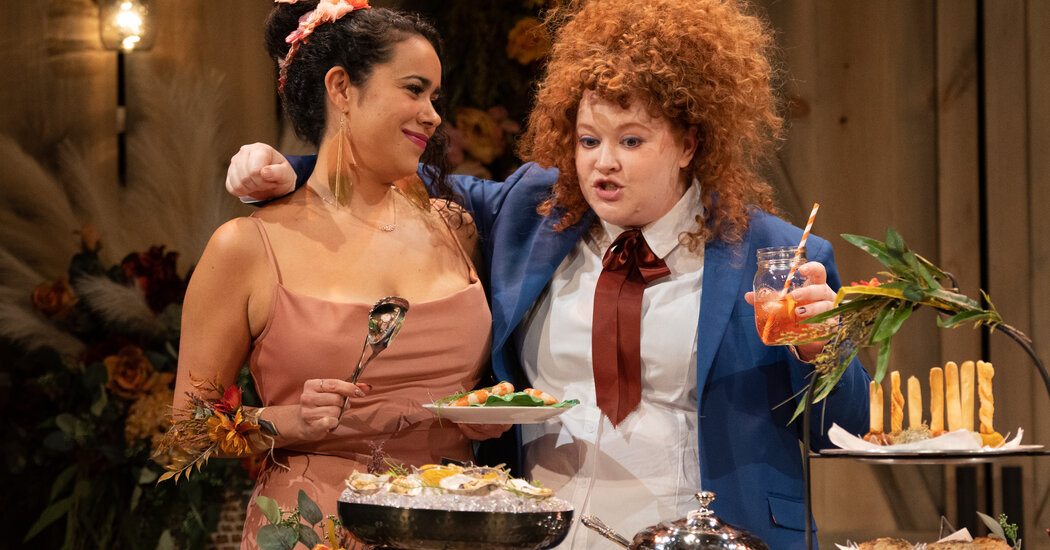 “At the wedding” review: cocktails, dancing and albatross

“I’m starting to think this marriage needs a villain,” Carlo says, as if the one she half-crushed was a murder mystery.

There are certainly plenty of misbehaving suspects, including Carlo herself, an independent snark machine with a hole in her heart and an alcoholic taste for the piercing insight. She terrifies the children’s table with a hellish lesson in the fate of romance: “the worst pain you’ll ever feel in your life.” She’s also, uh-oh, the bride’s former lover – you know, the one who neglected to RSVP

Although this isn’t by far the first time a comedy has exploited the nuptials setup with cringe-worthy ex Bryna Turner.”At the wedding,” which opened Monday at the Claire Tow Theater, offers a fresh and incisive take on the genre. And in Carlo, the story’s bruised heart, he gives actress Mary Wiseman, with her curly red mop of hair stacked like lesbian Lucy, a brilliant showcase for her two-tier comedic genius.

I say on two levels because, with Wiseman, one thing always happens verbally upstairs and another emotionally in the basement. Sipping an endless succession of wedding libations in a sort of Northern California barn, his Carlo does like a porcupine, pulling quills in the form of jokes. Wasn’t the ceremony, she cheerfully asks another guest, “aggressively heterosexual”? (Her ex, Eva, married a man.) “I almost thought they were going to start checking her hymen right in front of us.”

The lines are funny; Turner has a boxer’s sense of rhythm two-hit jokes. But it’s Wiseman, who first stole the show as the brilliantly dark belle in Branden Jacobs-Jenkins’ “An Octoroon,” who makes them hilarious by making them sad at the same time. Although focusing his anger on the wedding as a fake celebration – “I’ve seen more convincing fire drills”, she says – Carlo is truly chomping at the scar of attachment himself. For those who don’t know how to stay in love, gifts like this are worse than embarrassment; they are torture.

LCT3’s light-hearted 70-minute production, wittily directed by Jenna Worsham, gives us both of those elements right away. A gigantic paper flower labial chandelier hangs from the ceiling of the set, by Maruti Evans; a playful but ominous “Til Death” sign beams its neon message amid Oona Curley’s fairy lights and lanterns. But neither the room nor the design fully endorses Carlo’s one-sided vision. The Eclectic Playlist (sound by Fan Zhang) is exactly the genre you’d want to dance to, and the Flattering Costumes (by Oana Botez) is the genre you want people to dance to.

It’s especially smart that Eva (Rebecca S’manga Frank) is allowed to look glorious in a truly elegant dress; this is no comic book bridezilla, and while we never learn exactly what happened to her relationship with Carlo, it’s obvious she had good reason to end it. What if the grief-stricken Carlo has become a scolding fury – Turner explicitly compares her to the former sailor in Coleridge’s Poemaccosting wedding guests with his gruesome story – his legit beefs never completely obscure our view of other revelers as a jumble of cuteness and monstrosity.

The play is structured to reveal this contradiction in a series of well-acted individual encounters with Carlo. A bridesmaid named Carly (Keren Lugo) tells her that “it wouldn’t be a failure if you decided to leave”, but later returns to comfort her. Eva’s drunk mother, Maria (Carolyn McCormick), rejects the RSVP gaffe but then fires Carlo herself. A guest named Eli (Will Rogers) confides he intends to propose to his partner at the party, thus (as Carlo warns) “emotionally hijacking” the festivities – which is apparently his job, not his. . However, it is much more complex than it first appears.

The same goes for Leigh (Han Van Sciver), an androgynous Lothair who uses his pronouns. Leigh’s flirtation with Carlo – which suggests they’re ditching the party to let off steam somewhere else – at first seems innocent enough, even though Leigh’s brother is the groom. When this innocence is later questioned and the selfish side of sexual freedom surfaces, the play still refuses to completely disown Leigh.

If Turner’s faith in his characters hasn’t always returned – Maria, who only gets one scene, feels guaranteed, and Leigh, despite Van Sciver’s cunning performance, is never quite consistent – his faith in the public is an entirely successful investment. His jokes often have long delays, setting up in one scene, winning in another. The plot, too, stays way ahead of you, confident that you’ll survive in pleasant uncertainty until its loose threads are finally pulled together. In one instance, it takes almost 40 pages of script for a throwaway line spoken by the overloaded waiter (Jorge Donoso) to deliver its reward sting.

That authorial patience is part of what makes “At the Wedding” so fresh; while there are plenty of one-liners, it’s not a yuk-yuk comedy that makes you laugh or signals its intentions too much. (“Bull in a China Shop,” Turner’s first professional playwright, seen at LCT3 in 2017, was a bit more raspy and insistent.) Turner’s way of reshaping the marriage genre for our time, inviting new characters into the party, is also invigorating.

She does it in a way that is far too thoughtful and skillful for it to seem fashionable or controversial. Rather, enlargement is central to the play’s examination of how our traditional ways of uniting people function in a world that has always been more diverse than its institutions.

For “At the Wedding,” these institutions include more than just marriage, which many queer people can now choose if they choose, in forms that, like Eva’s spectacular dress, are personalized. They also include love itself and its loss. For Carlo, and for all of us at times, love is the albatross strung around our necks, and the sad story we are cursed to tell forever. It’s funny if it’s not you.

At the wedding
Through April 17 at the Claire Tow Theatre, Manhattan; lct.org. Duration: 1h10.

Luxury Easter treats to get for this year, including Belgian chocolate eggs