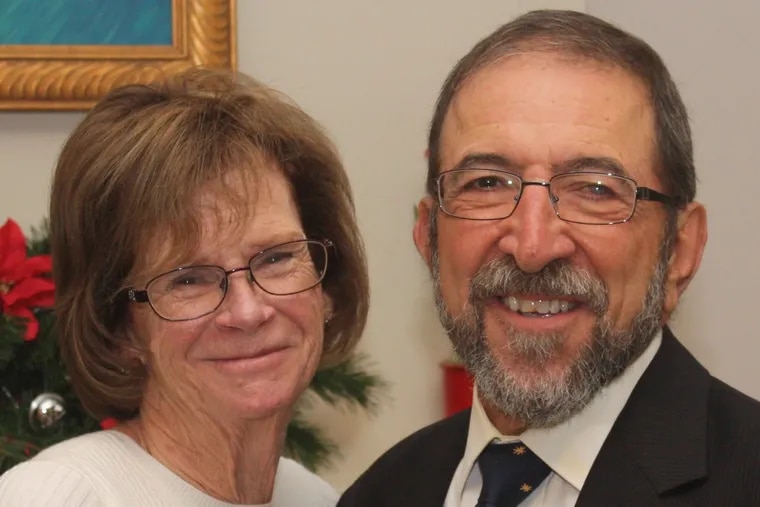 A life together has brought them great joy

The Leyman phone rang for Phillip. She was the younger sister of a friend from high school, and there was someone she wanted him to meet.

“Why not?” thought Phillip, then a student at Temple University living with his parents in Eddystone. He walked a block to the friend’s house and met Kelly Turner.

“She was a beautiful young woman and I was seduced,” he said.

“First of all, he was a college guy – that was a plus!” said Kelly, then a senior at Notre Dame High School in Moylan. “He was quite handsome with a nice smile.”

Before returning home, Phillip retrieved a copy of his St. James Catholic High School photo from his wallet and signed the back for Kelly: “To a blonde bombshell. Good luck with all your future romances.

Phillip had planned to do the romance. He asked her to go to the cinema: Romeo and Juliet. Shortly after, Kelly went to visit their mutual friend, Karen, and then walked down the street towards Phillip’s house. He was about to leave in his car but stopped to see what Kelly wanted. She wanted him to accompany her to the Notre Dame Class of 1970 ring dance – which coincided with the seniors receiving their class rings. He accepted.

“Eddystone is a small town, and when my parents found out he was taking me they called some friends of my brother’s to see if Phil was an OK guy,” Kelly said. “He got his thumbs up.”

She lifted the top half of the egg, pulled out a Hershey’s Kisses, and replaced the lid.

Phillip hinted louder. “Look around you. Maybe you will find something.

The Kisses hid a diamond ring.

“Yes!” Kelly said holding out her hand so Phil could put the ring on her finger.

On December 11, 1971, the couple were married at Our Lady of Peace Catholic Church in Milmont Park. A reception for over 200 people was held at the United Auto Workers Union Hall in Eddystone. “I come from a large Italian-American family — cousins ​​by the dozen — and everyone was invited,” Phillip said.

“The reception wasn’t fancy, but we had a live band playing rock and roll, and everyone had a great time,” Kelly said.

At cake time, Kelly’s father – a wonderful prankster named Joe who looked a lot like John Wayne – put his face next to the cake to watch his daughter and new son-in-law do their part.

Kelly and Phillip exchanged a look, silently agreeing on what to do. “We both took our slice of cake and shoved it right in his face,” Phillip said.

The room burst out laughing.

The couple took a quick trip to Ocean City, NJ, and then six months later, honeymooned in Jamaica.

Phillip, who is now 72, had graduated from Temple just before the wedding. He became a process engineer for AT&T, then a scientist for the Army Research Laboratory.

The family settled in Oxford, Chester County, where Kelly and Phillip still live. When their children became more independent, Kelly took a job helping in a special education classroom, and her love for the students she worked with turned out to be life changing. His next job was in the administration of Devereux Advanced Behavioral Health, which offers therapeutic, educational and other programs for students and adults. At 40, Kelly began classes at Immaculata University and later earned a degree in communications.

She was director of development for Devereux New Jersey until her retirement in 2012 to oversee her eldest grandson, Reed, who is now 10, and then her brother, Phillip, now 7.

Phillip – aka Pop – retired in 2019. Previously a board member of the Oxford School District and the Oxford Educational Foundation, he is a volunteer tutor in chemistry and maths.

The couple enjoy traveling locally, regionally and internationally. They attend opera and ballet in New York, walk down the Shore every summer, have hiked the Grand Canyon, Acadia National Park and Monument Valley, and traveled to Australia, Greece, Ireland , in Italy and in France.

“Phil is a good man,” Kelly said. “He’s kind, he’s loving, he’s caring, he’s a hard worker. And I knew that from the start because he was so good with his mom and dad.

Phillip said his love for Kelly grew through shared laughter – he relishes her enthusiastic laughter – and mutual respect. “She doesn’t care much about the little things, but we take other people’s comments seriously,” he said. “If I have an idea or a thought about something I’d like to do, I always talk to him about it. She is always open to discussion. We make decisions together.

They took on challenges.

“The death of our parents was the hardest thing we had to go through,” Kelly said.

“She was extremely close to her father, and it was very difficult for Kelly when she was diagnosed with lung cancer,” Phillip said. “He died in 1985, he was the first one we lost.”

But above all, things have been great.

“We had a lot of fun raising our daughters and are very proud of them,” Kelly said. “Our three daughters have brought us great joy – and so have our two grandsons,” agreed Phillip.

The couple are members of the Church of the Sacred Heart in Oxford, where Kelly is a Eucharistic minister and Phillip a reader.

When Reverend Joseph Shenosky discovered that their 50th anniversary was approaching, he had an idea. And so on Saturday, December 11 – 50 years to the day after their wedding – Kelly and Phillip renewed their vows at a special mass. Shenosky was joined by the Reverend William Dooner, who had celebrated Mass for their 25th anniversary.

The couple’s daughters hosted a lunch for 40 at Wyncote Golf Course. The invitations were created by Kelly-Anne Leyman Design. DJ Jay-Ski, her daughter Brighid’s fiancé, played music from the 60s and 70s. His son-in-law Chris took the photos.

The couple hope to return to Sicily and Australia, where Phillip’s grandparents were born, to visit relatives he found through genealogical research. They are also planning a trip to Enniscorthy, Ireland, the birthplace of Kelly’s grandmother.

Royal Family: The Queen’s most expensive necklace worth £66m, she was only loaned to Kate Middleton