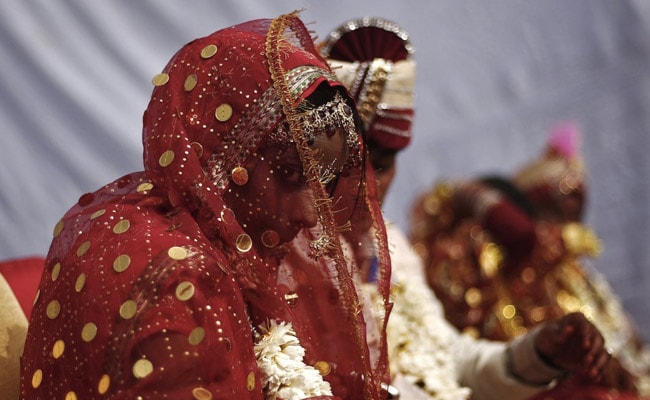 CAIT said it expects business worth Rs 5 lakh crore from the weddings.

Did you know that around 10 million weddings take place in India every year?

They also generate over $40 billion in revenue.

However, due to the pandemic, industry sales have plummeted. Movement restrictions and large gatherings have blocked millions of weddings.

Now that the restrictions are lifted, around 40 lakh marriages are expected to take place from mid-April 2022 to July 2022.

The Confederation of All Traders of India (CAIT) said it expects business worth Rs 5 lakh crore from these marriages.

Here are five companies in the listed space that could benefit from this massive spending.

The first stock in our list is Titanone of the largest watch and jewelry retailers in India.

The company derives nearly 80% of its turnover from its jewelry division. It sells jewelry through its brands Tanishq, Zoya, Mia and Caratlane.

Indeed, the demand for gold and gold jewelry will increase. The precious metal is considered auspicious. It is widely used to make traditional jewelry. Besides that, it is also a popular wedding gift.

Titan has already started to reap the benefits of this pent-up demand.

The company reported strong revenue growth of 31% year-over-year in the December 2021 quarter, driven by robust demand during the holiday season.

It also reported a standalone net profit of Rs 990 crore for the third quarter, up 135% from a year ago. 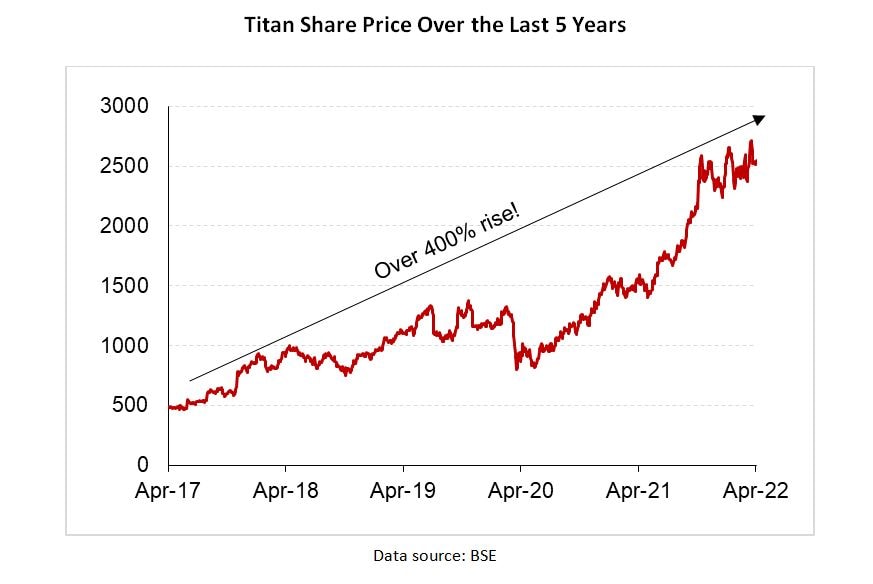 Next on our list is Thangamayil, another jewelry retailer.

The company is one of the fastest growing jewelry retailers in the state of Tamil Nadu.

Thangamayil mainly deals in four product lines: gold, silver, diamonds and platinum. The sale of gold is a predominant source of its income.

With a pick-up in demand for weddings and rising gold prices, the company’s revenues are also expected to increase in the medium term.

Its growth will be supported by the expansion of its network as well as the opportunities presented by a large part of the unorganized players in the industry.

However, this should improve as the company has implemented various cost control measures. 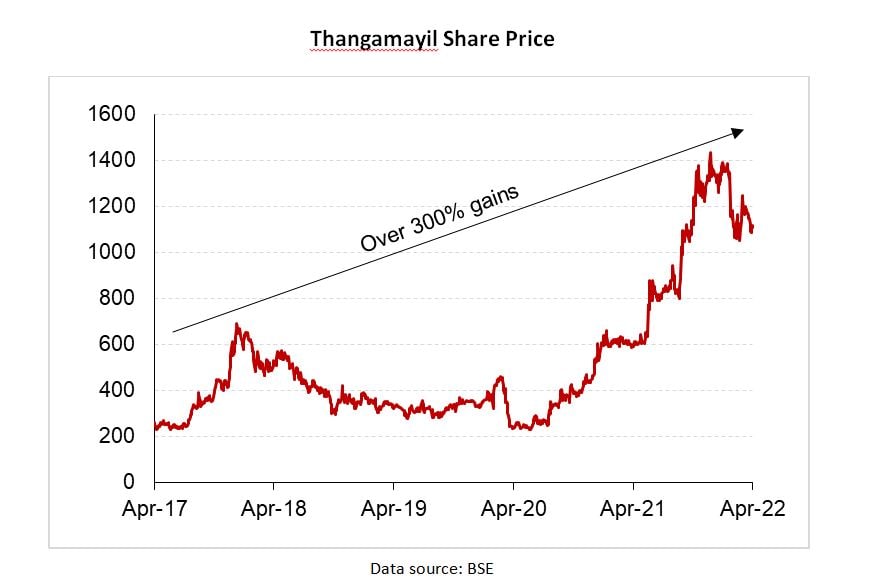 The company caters to the Indian party wear market with a diverse portfolio of brands such as Manyavar, Mohey and Manthan.

It is well positioned to tap into the large and growing demand for bridal sets over the coming months, thanks to its strong brand franchise.

For the nine months ending December 2021, Vedant Fashions recorded a 165% year-on-year growth in its consolidated net profit to Rs 220 crore. This is thanks to a solid operating performance. The company’s revenue also nearly doubled to Rs 750 crore.

India’s bridal and celebratory wear market is pegged at around Rs 100 crore, with the branded segment expected to grow at a CAGR of 18-20% by 2025.

Vedant Fashions is well positioned to make the most of this demand. The company is one of the leading players in the costume market with a market share of over 60%. It is also the largest branded fabric player in the organized shirting segment.

Since suits are a staple of the wedding, the business stands to benefit from the increase in the number of weddings.

Raymond has a track record of over 95 years. It also has a strong brand image supported by a large distribution network. It has a network of 1,420 stores and a dedicated retail space of 2.3 million square feet.

For the December 2021 quarter, Raymond reported a multiple jump in its net profit to Rs 100 crore. Its operating revenue also increased 48.3% year-on-year.

According to the company, this is the most profitable quarter in the last 10 years. She has also generated free cash flow to reduce debt and is progressing towards a net debt-free business. 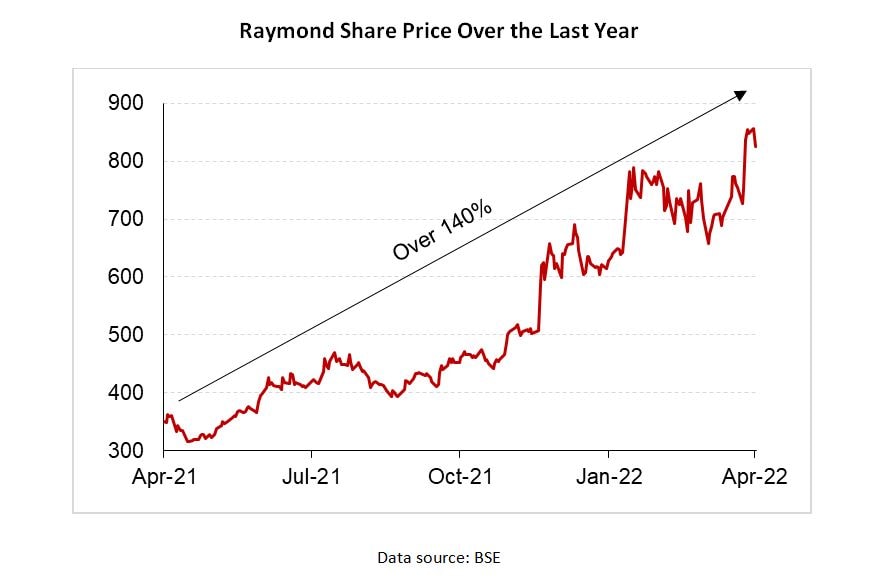 Last on our list is Hero MotoCorp, the world’s largest two-wheeler manufacturer.

The upcoming wedding season is expected to see demand for two-wheelers in rural areas, which are usually given as wedding gifts.

It could boost the company’s sales which otherwise were in a slump as the pandemic hit festive demand.

For the December 2021 quarter, Hero MotoCorp’s revenue fell 18.5% year-on-year due to a weak holiday season and the second wave of Covid-19. The company also reported a 31.6% year-on-year drop in net profit.

Management said the underlying demand drivers were intact. This should lead to positive momentum and support for volumes in the coming quarters, with improved margins.

While Hero MotoCorp’s core business still lies in the motorcycle segment, the company believes that scooters will lead the adoption of electric vehicles in the country in the near term.

It also indicated that its plan to launch EV products in 2022 is intact. It will continue to focus on its EV portfolio, supported by new launches/variants at regular intervals. 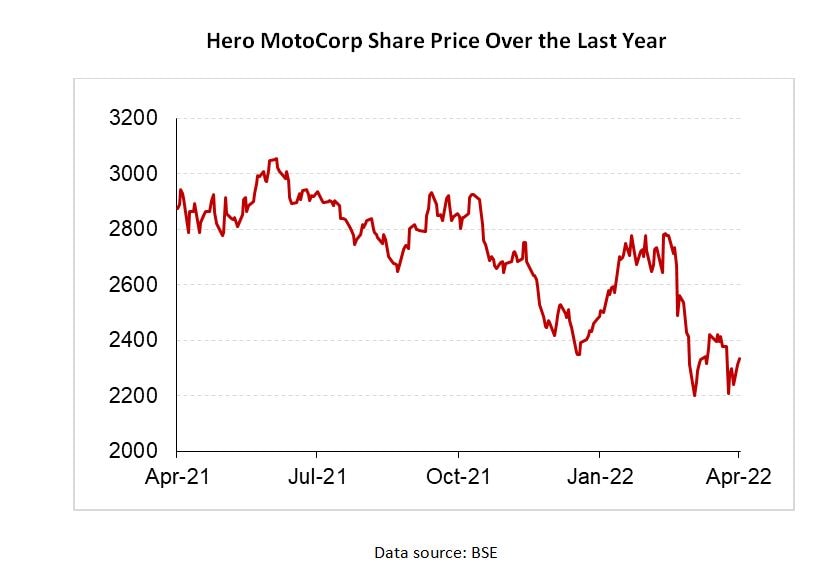 Should you buy marriage-related stocks?

If there’s one industry that isn’t impacted by the ups and downs of the economy, it’s the Indian wedding industry. Indians are known to spend lavishly on weddings, rain or shine.

Besides the typical wedding expenses on wedding venues and services, a large amount of money is spent on home repairs and paint jobs.

However, it must be realized that the demand for these products or services is seasonal.

The turnover of companies in this space can also depend on factors other than demand. For example, in November 2021, a spike in gold prices halted orders for the ensuing wedding season.

Therefore, marriage actions should be viewed with the same caution as other actions. Supported research should not be compromised despite the positive odds.

Warning: This article is for information only. This is not a stock recommendation and should not be treated as such.

This article is syndicated from equitymaster.com

(This story has not been edited by NDTV staff and is auto-generated from a syndicated feed.)

Chrishell Stause sold a wedding ring to pay for her house