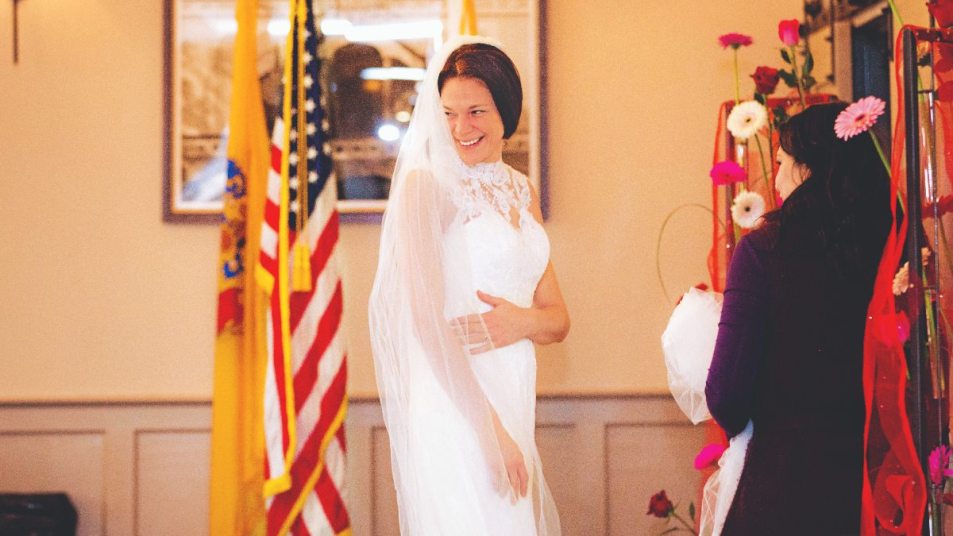 “Five hundred wedding dresses?” Bill Moen marveled as his mind processed the incredible news the woman told him on the phone. “And you want them all given to veterans and their families?” It was an incredible windfall for the landowner in Camden County, New Jersey. As head of the Office of Military and Veterans Affairs for more than 26,000 veterans in his community, Moen was always looking for new ways to honor veterans’ service and sacrifice.

“Yes sir!” said the woman. She explained that the real estate company she worked for, M&M Realty Partners, inherited the dresses from a bridal shop that closed in the summer of 2017. They had been looking to get them into good hands for months.

“What do you think?” she asked.

Bill’s heart raced. Coming from a military family himself, he knew firsthand the emotional and financial hardships these families faced. They can save the money they would have spent on a wedding dress and put it towards a down payment on a house or student loans.he reflected.

“Absolutely – thank you!” he exclaimed with a broad smile. “We’ll take them all!” »

Within weeks, Bill and his team had moved all the dresses to the city’s archives and records department. They began planning a wedding dress giveaway pop-up event for families of veterans and serving military members in their community.

“Each bride will be pampered and have the opportunity to choose a dress and take it home, free of charge,” he told his enthusiastic team. “It’s our way of saying thank you for their service to our country.”

Enthusiastic, the group circulated flyers on social networks. They invited brides-to-be from all over New Jersey to register at one of the 200 locations they had opened to give away the first wave of dresses.

But as the news spread, enthusiastic requests from brides started pouring in from all over the country. It became clear that the idea was a bigger success than they had dreamed.

“We need to expand this!” Bill got excited, adding another day and 100 more slots to the event. “We need to make sure everyone gets the dress they’ve always wanted.”

On Valentine’s Day 2019, Bill’s team hosted the first “Salute the Dress” event at Camden County Boathouse. They transformed the venue into a bridal salon, with a team of fashion experts welcoming every bride-to-be.

With their help, each woman pored over shelves of beautifully beaded and lace dresses – some worth up to $10,000. Each bride chose three dresses, veils and accessories to try on. Tears and laughter rang out as they modeled for family and friends.

“It’s like a dream come true,” smiled one bride-to-be, holding up the event sign that read “I saluted the dress” as she picked out her perfect dress. “I feel like a princess!”

For others, the dresses were to be used for another purpose: to celebrate the vows they had already shared. A woman was considering wear her dress to renew her vows with her veteran husband. “That’s perfect,” she beamed. “I want to wear it forever.”

Another veteran wears hers for her 20th birthday. “I’m so thankful they’re doing something for female veterans,” she said. “It’s more than a dress, it shows us that we matter.”

For Bill and his team, who donated 250 dresses that day, it’s a small way to give back – and one they’ve continued each year, starting with the remaining 250 dresses. “These families gave us the ultimate sacrifice,” says Bill. “Being able to honor them is by far the greatest gift!”

This article originally appeared in our print magazine, First for women.