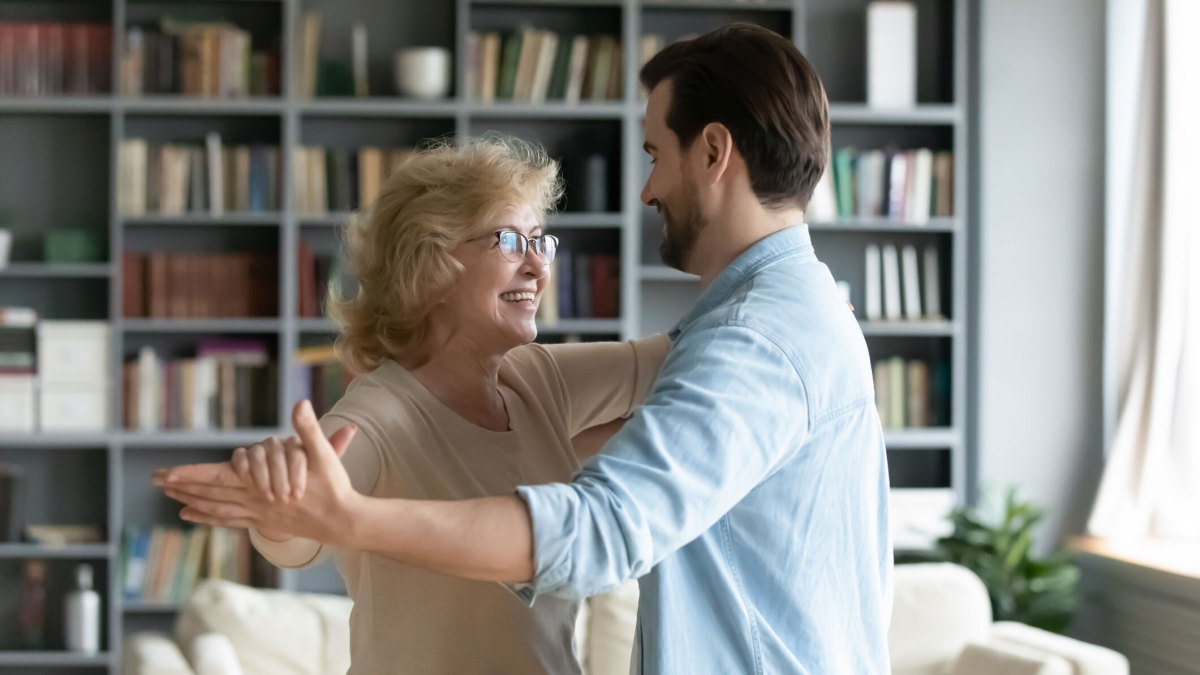 There are many things that go into planning a wedding, from finalizing the wedding budget to arranging a bridal shower. But perhaps one of the least stressful and most fun parts of the planning process is choosing your music. And just as the happy couple have their first dance, the groom and his mother usually hit the dance floor to share a memorable moment together as well.

Once you’ve selected the perfect song, you can decide if you want to practice and take dance lessons for a more formal dance number, or do it on the wedding day. No matter how professional your steps, the dance will be memorable and meaningful on its own, especially with a featured song that’s special to both of you.

Related: The Biggest Wedding Trends of the Year

For mothers, sons or mother figures looking for mother son wedding songs for dancing – from country ballads and classic rock to acoustic renditions and pop songs – here are our top 30 picks.

Notable words: “Before you go to sleep / Say a little prayer / Every day, in every way / It’s getting better and better”

Although Lennon – a father – wrote “Beautiful Boy” after having son Sean, this song is a classic mother-son dance song when it comes to marriage. As you grew up your relationship changed, but what remains is the classic nature of this song.

Notable words: “But whatever road you choose / I’m right behind you win or lose”

Just when you feel like you’re going to stay forever young, you find yourself dancing with your child at his wedding. How is it to grow?

Notable words: “When you ring the way everything changes / Well my mama told me there’ll be days like this”

Eventually it all works out – a feeling your mother has probably told you all your life. Van Morrison’s “Days Like This” is the perfect testimony to this.

Notable words: “You were an angel in the form of my mother/When I fell you were there to hold me up”

Can anyone do a ballad like Ed Sheeran these days? “Supermarket Flowers” is the British crooner’s ode to his mother, making it one of the finest mother-son dance choices you can make.

Notable lyrics: “But of all these friends and lovers/There’s no one like you”

The Beatles’ “In My Life” is not only a gorgeous song choice to dance with your mother to at your wedding, but it’s also one of the most iconic, memorable, and nostalgic songs about highs and lows. of life.

Notable words: “For someone so small/You look so strong/My arms will hold you/Keep you safe and warm”

Phil Collins wrote ‘You’ll Be in My Heart’ for his daughter Lily Collins, born in 1989. But it became an anthem for mothers and sons everywhere when it was featured in the Disney movie Tarzan.

Notable lyrics: “Oh, my mama loves me, she loves me/She gets down on her knees and hugs me/How she loves me like a rock”

“Loves Me Like a Rock” tells the story of the unprecedented love between a mother and her son. It’s a bit more upbeat than some of the other swaying songs, but it’s a real gem that the crowd will appreciate.

9. “My Mother’s Eyes” – Frankie Valli and the Four Seasons

Classic and cool atmosphere only with the version of “My Mother’s Eyes” by Franki Valli & The Four Seasons.

10. “Only One” – achievement by Kanye. Paul McCartney

Notable words: “Hello my only one, remember who you are / You have the world because you have love in your hands”

Written for her late mother before she had the chance to meet Kanye’s firstborn, “Only One” is sung from Donda West’s perspective as she sends her and her first grandchild, a message from heaven. It’s heavy, it’s beautiful, but above all, it’s memorable.

Notable words: “Time is a wheel in constant motion that keeps us rolling/Tell me who wants to look back on their years/And wonder where those years went”

Definitely a diddy you often hear at weddings, Lee Ann Womack’s “I Hope You Dance” has a sweet and caring message at its heart. And it’s easy to swing.

Notable words: “You will always be the girl/In my life forever”

If you’re looking for an R&B vibe for your mother-son dance, you can’t do better than Boys II Men, the true kings of racing.

Written while Fleetwood Mac, as a band, was at the heart of it all, “Songbird” is about the unconditional love that keeps us all glued together. Is there anything more appropriate for a mother-son duo?

14. “What a wonderful world” – Louis Armstrong

Notable lyrics: “And I think / What a wonderful world”

If you use Louis Armstrong’s “What a Wonderful World” you might bring the crowd of wedding guests to tears. I’m just saying.

(scroll down to continue reading)

Notable words: “Take me, in your darkest hour/And I’ll never give up on you/I’ll ​​support you”

Notable words: “I feel like this is the beginning/Though I’ve loved you for a million years”

Although it may have been written for Stevie Wonder’s wife, “You Are the Sunshine of My Life” also easily applies to a mother-son relationship. It’s one of the best songs about unconditional love to date, which makes it an awesome choice.

Notable words: “I feel wonderful ’cause I see the light of love in your eyes/Then the wonder of it all is you just don’t realize/How much I love you”

Another timeless love ballad, “Wonderful Tonight” will have everyone in tears watching your mother-son dance.

Notable lyrics: “I wanted to tell him how grateful I am to him / For giving me life, I did my best”

Edwin McCain wrote this song as a tribute to both his adoptive mother and his biological mother, so it will particularly strike a chord with any groom who has two mother figures in their life.

Notable words: “Just call my name/And, you know, wherever I am/I’ll ​​come running, oh, yes, I will”

Originally written by Carole King, “You’ve Got a Friend” describes a universal love rooted in friendship and being there for each other.

Notable words: “All my life I’ve been frozen / The sweetest devotion I’ve known”

Adele co-wrote ‘Sweetest Devotion’ with her son, Angelo, as inspiration. In each lyric, she details the bond between mother and son and how becoming a parent has changed her. If you choose it as your mother son wedding dance song, your mom will love it for sure.

For fans of classic songs, Nat King Cole’s “Unforgettable” will always be a timeless choice for your mother-son dance.

Related: Get inspired by these wedding hashtags

Notable words: “You fill my heart with joy/Take away all my sadness/Ease my troubles, that’s what you do”

Another mother-son song that stands the test of time, Rod Stewart’s “Have I Told You Lately” is popular for its breathtaking, vulnerable lyrics that we can all relate to.

Notable words: “I got her spirit/She always got my back/When I look at her
I think/I want to be just like that”

Give your mother-son the country-dancing treatment with Lauren Alaina’s “Like My Mother Does,” a heartfelt tribute to moms everywhere.

Notable words: “And if you ever forget how much you really mean to me / Every day I’ll remind you”

If you’ve always felt like you could rely on your mom, Bruno Mars’ pop version of a mother-son song might be for you.

Notable words: “Somewhere Over The Rainbow / High Up / And The Dreams You Dream Of / Once In A Lullaby”

While it’s not necessarily written about a mother-child relationship, Israel Iz Kamakawiwo’ole’s version of “Somewhere Over the Rainbow” is a nice chill out moment we can all take.

Notable lyrics: “There’s no safer place I’ve found / Than the shoulder of her white nightgown”

Another country diddy, The Band Perry’s “Mother Like Mine” is a slow, easy-dancing song that really drives home how special moms are.

Notable lyrics: “Well, you wanted it all your life / You come and go with the light”

For a more up-to-date mother-son song, Bon Iver’s “Hey, Ma” is a folky indie jam. It was even nominated for a Grammy!

Notable lyrics: “If You’re Lost You Can Seek and You’ll Find Me / Many Times”

Cyndi Lauper made it a hit in 1983, but for a more wedding-friendly version, Iron & Wine’s “Time After Time” slows it down enough for a mother-son dance.

Notable words: “Look at the stars/Look how they shine for you”

Notable words: “You are an angel in armor/You are the righteous in every fight/You are my life and my refuge/Where the sun sets every night”

Close your eyes and dance to this song by Michael Bublé, a tribute to the strength of women everywhere.

Next, the cutest micro wedding ideas for your small ceremony.

The Little Healing Place is a spa basket company

He took off his ring to give his dog a bath 21 years ago and thought he had lost it forever. Fate had other ideas.