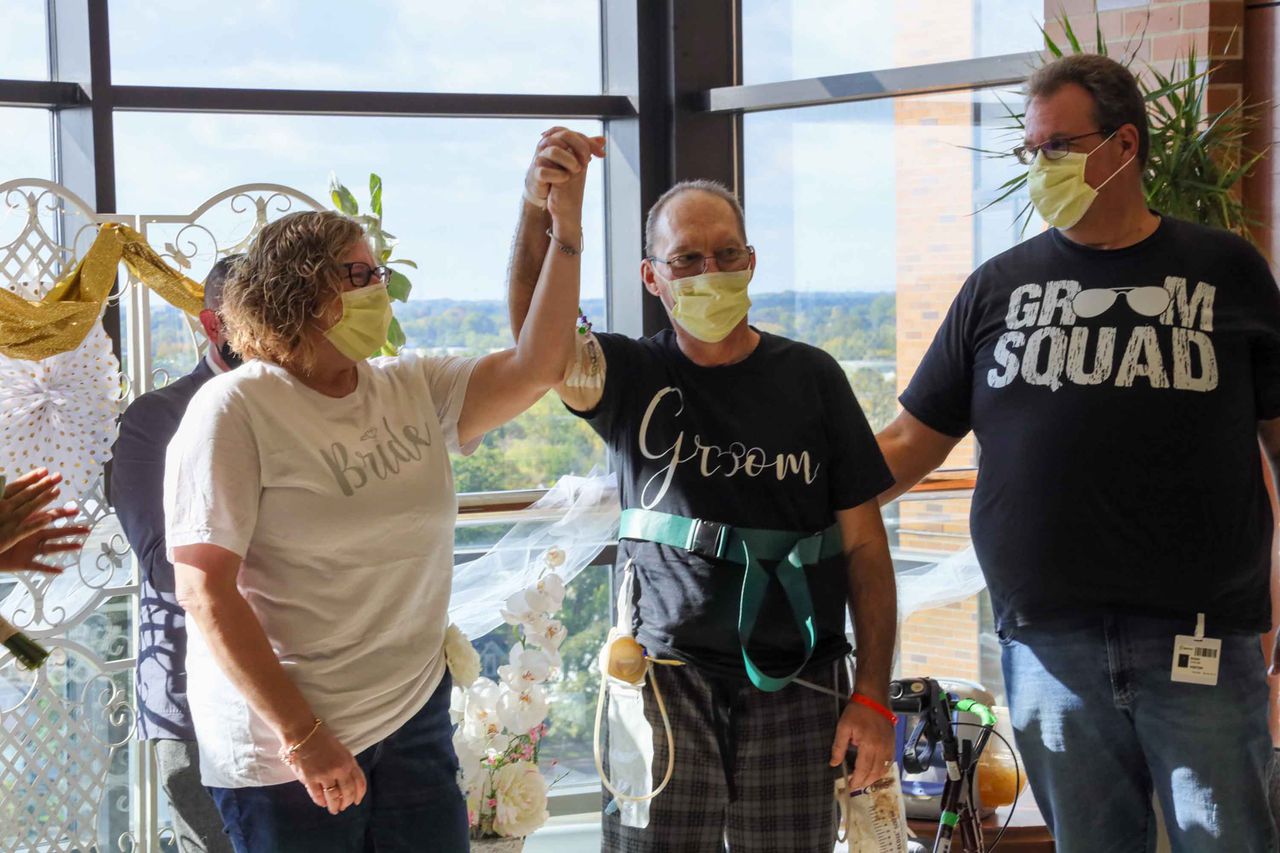 When Devlyn and Laurie Kuehl tied the knot last fall, it wasn’t under the most ideal of circumstances.

Devlyn, a 56-year-old veteran and St. Johns man, was showing signs of recovery after an unpleasant case of COVID-19 that put his life at risk. He was just days off from a week on a ventilator when he proposed to his longtime girlfriend from his hospital bed.

“I thought maybe there was a chance, maybe I wouldn’t make it,” Kuehl recalled.

The ceremony was simple, but memorable. Surrounded by a guest each and a handful of hospital caregivers, the two exchanged vows and sealed their love at Sparrow Specialty Hospital in Lansing.

On Saturday September 24, almost a year later, the couple celebrated their wedding surrounded by family and friends who were unable to join them last year. The ceremony and reception, which took place at the VFW Post in DeWitt, was also a sign of progress.

“It means a lot; it means a whole lot,” he said. “We would have liked to be able to get married in front of everyone, but with me being sick, we couldn’t do it. that we could get together with everyone and let them know that we love them and care about them.

When Kuehl first arrived at Sparrow, he was struggling to breathe in his second bout with COVID. His body was struggling to fight off the coronavirus, on top of an inflamed pancreas, and he was placed on a ventilator for about a week.

“His body was failing and he needed a lot of extra support,” said Dr. Kristy Beckholt, the hospital’s executive medical director and one of Kuehl’s physicians. “There have been scary days.”

It wasn’t long after he regained his ability to speak that he came up with the idea of ​​marriage. In the space of around three days, staff collected decorations from their own homes and transformed an area of ​​the hospital into a makeshift wedding chapel.

The couple called the event a pleasant surprise. They wore “Bride” and “Groom” t-shirts respectively, and Devlyn’s best man helped him stand up for the ceremony. Then they grilled with a sparkling fruit juice.

The memory of the event brought tears to the eyes of Dr. Beckholt and Tina Gross, President and Chief Nursing Officer of Sparrow Specialty Hospital, who said you could feel the love and joy in the room that day- the.

“One of the greatest things about Sparrow Specialty and the team we have here is that we really focus on the whole person, not just the disease process they’re going through,” Beckholt said. . “Not only do you focus on the body, but also on other aspects like the mind, the heart, the love. That’s why we are so honored and moved to be part of Devlyn’s recovery, and the he and Laurie’s love affair, which finally really helped him get over the next hurdle to bring him home.

Devlyn is back home with his wife these days. His health has improved, although he still struggles with long COVID symptoms including fatigue, brain fog and memory problems.

The Kuehls said they hope those who hear their story will be inspired to get a COVID shot if they haven’t already. Devlyn was not vaccinated before he fell ill, which he regrets.

In addition, they offered a second lesson.

“Your relationships in general, don’t take them for granted,” Laurie Kuehl said. “You just don’t know what could happen.”

Threats are a part of life for gubernatorial candidates, says Tudor Dixon